Birds killed in window collisions in Atlanta, by Adam Betuel. 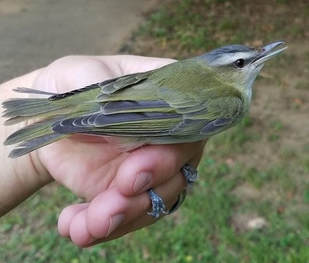 Red-eyed Vireo that collided with a building but was later released. Photo by Adam Betuel.
Migration is one of the most amazing feats in the natural world. Millions and millions of birds take to the skies, dodging predators, burning fat stores, and following the ever changing weather patterns as they press on towards their breeding grounds in the spring or winter havens in the fall. The setting sun and stars guide them as they soar through the night, some stopping along their ingrained routes to refuel. This journey is long and difficult and a relatively new threat has emerged and may be the most dangerous of all--buildings.

Current research estimates that between 365 million and 1 billion birds perish each year from colliding with buildings in the United States. Bright lights at night can disorientate migrating birds causing them to crash into structures or “trap” them in beams of light leading to exhaustion. Birds also struggle with reflective surfaces during the day as they stop and feed or rest. Shiny glass exteriors, internal plants near windows, glass corners, and lots of greenery close to buildings all can be deadly as birds struggle determining what is and isn’t a reflection and where there are open flyways.

​Thanks to generous grants from the Disney Conservation Fund and the Georgia Ornithological Society, Georgia Audubon has been treating Atlanta-area buildings and nature centers with a special film that breaks up reflection and helps birds avoid collisions. This not only saves birds but also serves as an opportunity to educate the people who visit these buildings about the problem of bird-building collisions and show them that there are many easy solutions to this problem.

To date, Georgia Audubon has treated six buildings, including the Trees Atlanta Kendeda Center, the Melvin L. Newman Wetlands Center, the Chattahoochee Nature Center, the Blue Heron Nature Preserve, the Southface Institute, the Sawnee Mountain Preserve Visitor’s Center, and Elachee Nature Science Center. Two additional buildings will be treated in the near future thanks to a generous grant from the Disney Conservation Fund.

In fall 2019, Adam Betuel, Georgia Audubon director of conservation, participated in the Greenbuild International Conference and Expo as a panelist on the LEED in Atlanta: Bird-friendly Design in a City in a Forest to share what builders and others are doing in this part of the US to both research and change the existing designs that are devastating our bird populations.

What Can You Do?

Become a volunteer monitor. We Need Your Help! ​
Georgia Audubon needs people to help us monitor for window collisions. This entails walking an early morning, pre-determined route around select structures, taking notes on collisions, collecting dead birds for scientific purposes (Atlanta Audubon has all necessary permits), and occasionally helping injured birds. Monitoring season runs from March 15 to May 15 and from August 15 to November 30 each year.  If interested please email Adam Betuel, Director of Conservation.
SIGN THe lights out pledge
Sign the Lights Out Pledge and join other commercial and residential homeowners in pledging to reduce outdoor lighting to protect birds during peak migration period. Click here to learn more or sign the Lights Out  pledge. ​
Report incidental findings
Report incidental findings. In addition to the formal surveys, we are encouraging everyone to document any incidental finding of a window collision of other bird deaths by submitting them to the D-Bird database.  D-Bird is an online crowd-sourcing data collection tool designed by New York City Audubon. This data allows for greater coverage across Georgia and helps provide context and guidance for future monitoring efforts. Whether at home, work, or out shopping, please report any avian collision victim you encounter.
Spread the Word
​Many people are unaware of the issue with bird-building collisions. Educate others, recruit volunteers monitors, speak with your supervisors or building managers if you believe your workplace is an avian hazard, or help connect Georgia Audubon with builders and architects.

Make Sure your home is safe 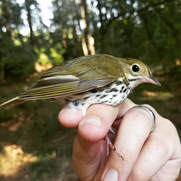 This Ovenbird was a lucky survivor and was released at a safe location. Photo by Adam Betuel.
More than 40% of all window collisions occur at residences. There are many ways to make sure your home and your bird feeders are safe places for birds to visit. Placing your feeders at a safe distance or applying window treatments can go a long way in reducing window collisions. Please visit these links for more information.

Here are some treatments that Georgia Audubon recommends for homeowners (see photos of treated glass below): 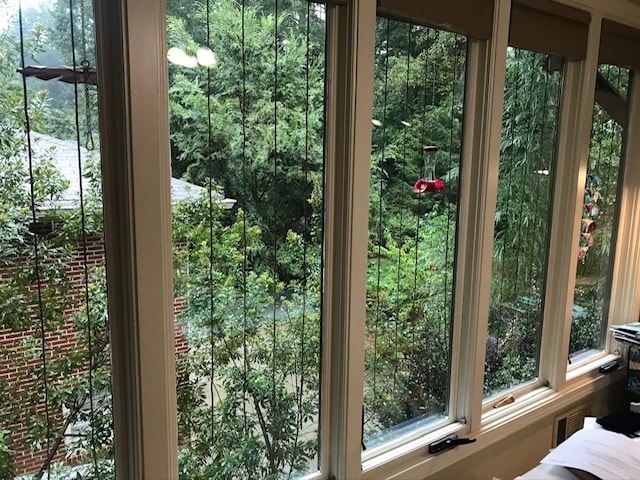 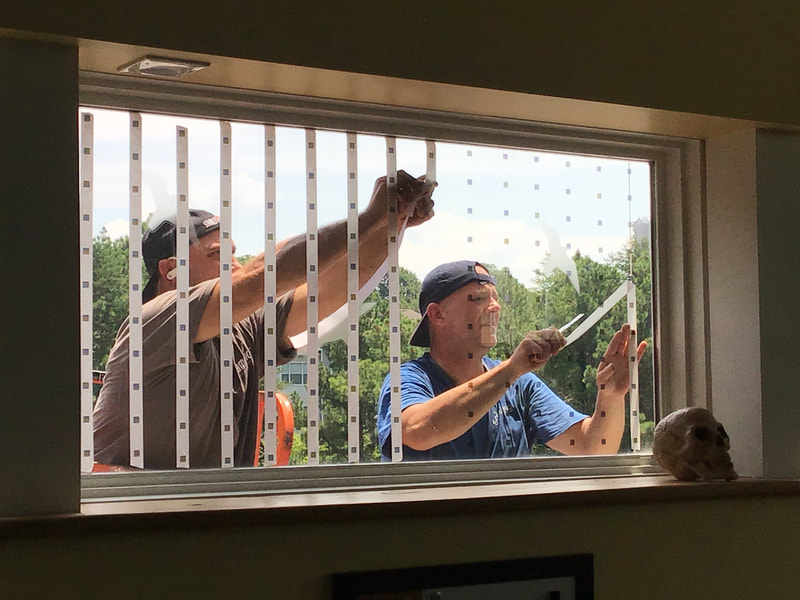 Fortunately, not all birds who collide with windows/buildings die. Many birds are found stunned and can be released in a safer location after they have had time to recuperate. Some individuals, however, are not releasable and would perish if left alone. Georgia Audubon has partnered with Atlanta Wild Animal Rescue Effort (AWARE) to care for these injured birds. AWARE is a wildlife rehabilitation center located in Lithonia, just east of Atlanta, that rehabilitates injured and orphaned wildlife native to Georgia. To learn more, please visit the AWARE website.

Georgia Audubon thanks the following partners