Eastern Phoebes, by Robyn Newman
Georgia Audubon is more invested than ever in our work building places where birds and people thrive. We offer a variety of webinars and digital resources to help you and your family gain a better understanding of our work and the birds that surround us.

We have also offer in-person field trips, events, travel, and educational opportunities.  We share upcoming events in our bi-monthly e-newsletter, BirdBuzz, and you can also find updates on our Facebook, Instagram, and Twitter pages, as well as right here on our website. If you would like to sign-up to receive our bi-monthly e-newsletter with a list of upcoming events, please consider becoming a member or visit our newsletter page.

If you are interested in a program with an associated fee but cost is a burden, please apply for a Georgia Audubon Scholarship.

"Monty and Rose" is a 2019 documentary written and directed by Bob Dolgan. The film tells the story of a pair of endangered piping plovers that nested at Chicago's Montrose Beach, becoming the first of the species to nest in the city since 1955. The endangered birds took up residence on one of the busiest stretches of one of the busiest beaches in Chicago. Those interviewed for the film include volunteers, biologists and other advocates who spoke out when a music festival was scheduled within feet of the plovers' nest site. The film made its debut on November 18, 2019, with a showing at the historic Music Box Theatre; Illinois Gov. J.B. Pritzker declared the date Illinois Piping Plover Day to honor the birds. "Monty and Rose" was an official selection of the One Earth Film Festival and aired on Chicago's PBS station, WTTW Channel 11, on May 2, 2020. More information is available at www.montyandrose.net.

About the presenter:
Bob Dolgan created his first film, "Monty and Rose," as a volunteer plover monitor in Chicago in 2019. He is a past Board Member of Chicago Ornithological Society and is the writer of the This Week in Birding newsletter, which is published twice each week. His writing has appeared in the Chicago Sun-Times, the Chicago Tribune, Cleveland Plain Dealer, Chicago Reader, Chicago Wilderness, Richmond Times-Dispatch and St. Louis Post-Dispatch. Bob earned his BA from Kenyon College and his MBA from Kellogg School of Management at Northwestern University.
Register for October Monthly Meeting 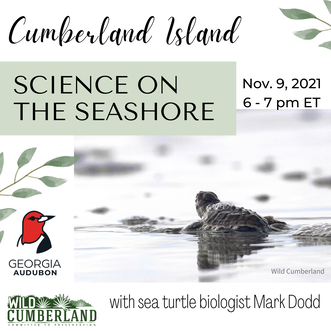 Cumberland Island: Science on the Seashore - Sea Turtle Conservation
Tuesday, November 9, 6:00 to 7:00 PM
FREE
Join Georgia Audubon and Wild Cumberland for the third event in our virtual education series that explores our state’s crown jewel - Cumberland Island - in ways you may have never seen before.

​On Tuesday, November 9th, we will be joined by Mark Dodd, coordinator for the Georgia Sea Turtle Program! Come learn about the incredible natural history of Georgia's sea turtle species, get an inside look at what it takes to protect and manage their conservation, and discover what makes Cumberland island an important ecosystem for sea turtles on our coast. ​
register for this webinar

We record most of our free programs, including virtual field trips, monthly meetings, and other programs, and make them available for later viewing on our YouTube Channel. You will also find a selection of other videos on our habitat restoration work, certified wildlife sanctuaries, ambassador hummingbird, and other topics. Check our YouTube channel at the link below and follow us to receive notifications when we post new content.
Take me to YouTube