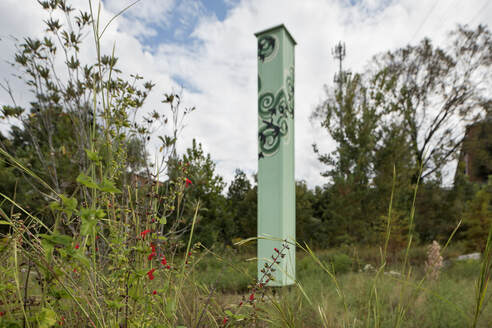 Atlanta Audubon is constructing Chimney Swift Towers, like this one in Piedmont Park, to provide nesting/roosting habitat for Chimney Swifts. Photo by Jessie Parks.
Georgia Audubon chose the Chimney Swift as our focal species for 2019-2020. A cigar-shaped bird, Chimney Swifts spend the summer months in Georgia, and their high-pitched twittering is often heard overhead. Their aerial acrobatics may remind people of swallows, but Chimney Swifts are actually more closely related to Ruby-throated Hummingbirds. They have adapted to a life among humans, finding a home in chimneys after their preferred old-growth trees began disappearing.

The conservation status of the Chimney Swift was recently updated to Vulnerable on the International Union of Conservation of Nature (IUCN) Red List of Threatened Species. Stating that “In recent times, the number of available chimneys has decreased as a result of the demolition of old buildings, the capping of old chimneys, and through chimney sweeps removing nests from chimneys (despite the species being protected by federal law). Even though a scarcity of chimneys may not be limiting the numbers of Chimney Swifts yet, the rate of habitat loss is increasing and possibly developing into a severe threat.”

Still a fairly common sight in Georgia, Chimney Swifts are being forced to respond to additional threats across their range—from chimney capping, to tree removal, to a decreasing supply of insects due to pesticides, pollution, and climate change. Other issues, such as building collisions and challenges on swifts’ wintering grounds are exacerbating population declines.
​
Ultimately, the Chimney Swift is a bird connected to people. With their epic agility and stamina, their taste for biting insects, and their propensity for nesting in our chimneys during the summer months, Chimney Swifts and humans have a unique connection. We need to pitch in to ensure the continued health of this species.
Watch this video about how Georgia Audubon is helping Chimney Swifts 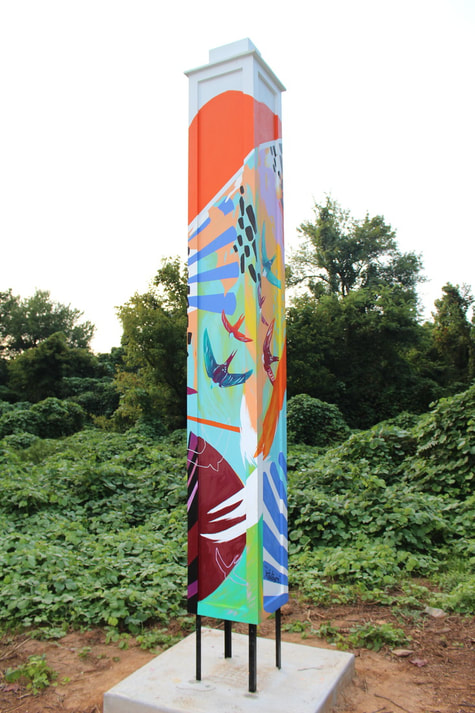 Georgia Audubon recently worked with the Town Lake Community Alliance to install a Chimney Swift tower along the Noonday Creek Trail.
Georgia Audubon is supporting swift conservation by building Chimney Swift towers in the state, beginning with our first tower in Atlanta's Piedmont Park in 2018.  Georgia Audubon has installed towers at the following locations:
​
Georgia Audubon is exploring additional tower locations and funding opportunities. If you are interested in funding a tower or are a commercial or public property interested in partnering to construct a tower, please contact our Director of Conservation, Adam Betuel.

Chimney Swift towers mimic actual chimneys,  serving as roosting and nesting habitat for the birds.  Much like a real chimney, the central tower and interior walls provide nesting and roosting opportunities for these birds. Specially adapted claws allow the Chimney Swifts to cling to the inside of the tower, where they build saucer-shaped nests made out of twigs glued together with the birds' saliva. Chimney Swifts will not allow other birds (including other swifts) to use "their" tower while they are nesting, but in late summer, hundreds or event thousands of individual birds may roost in one large chimney, creating a spectacular site overhead as they flock into the chimney near dusk. ​

how Can you Help 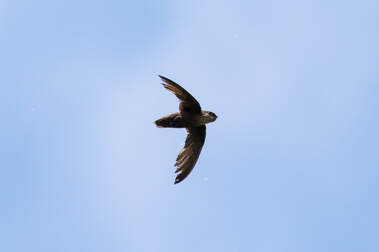 Chimney Swift, by Shawn Taylor.
Here are some ways you can help Chimney Swifts in your landscape:
Donate Now