Georgia Audubon is the leading voice for the birds across the state of Georgia. Georgia Audubon watches vigilantly for harmful activities that could affect birds or undermine the integrity of bird habitat. Many birds found in Georgia are migratory and stop in Georgia only briefly before continuing their journey to other areas of the country and continents. Therefore, our work to inform decision makers about legislation and policies that benefit or threaten birds and their habitat involves local, state, national, and, occasionally, international concerns.

From clean air and water to support for the nation’s iconic national parks and national wildlife refuges to climate change and pesticide use, many of the same issues that touch people also touch birds. In addition, protections for birds conferred by such milestone legislation as the Neotropical Migratory Bird Conservation Act and the Endangered Species Act have long-term implications for people along with more immediate impact on birds.

​The following are a list of values for which Georgia Audubon advocates.  These values guide us in our programmatic work:

Donate to support our advocacy efforts

Issues we are currently monitoring

Okefenokee Swamp mining Proposal
In July 2019, a proposal was submitted to the U.S. Army Corps of Engineers by an Alabama-based company, Twin Pines, seeking issuance of a permit to mine for heavy minerals (titanium and zirconium) from Trail Ridge near the southeastern edge of the Okefenokee Swamp. After public outcry, this plan was withdrawn.

In March 2020, Twin Pines, LLC, an Alabama-based mining company, submitted a revised application to the U.S. Army Corps of Engineers (USACE) seeking issuance of a permit to “construct a demonstration mining project on 1,042 acres that will mine heavy mineral sands on 898 acres over 6 years” from Trail Ridge near the southeastern edge of the Okefenokee Swamp.

The mining is proposed to go an average of 50 feet deep from the ground surface which is below the level of the Okefenokee Swamp depression, which is integral to maintaining surface water and groundwater hydrology in this region of southeast Georgia. Twin Pines plans for a facility on a 12,000 acre tract along Trail Ridge and very close to the Okefenokee National Wildlife Refuge in Charlton County.

The proposed mine in the revised application is smaller, but still represents a similar, if not identical, threat, in that the company still intends to mine all of the economically-viable deposits on the entire 12,000-acre tract.

The Okefenokee is the largest blackwater swamp in North America, comprised of about 440,000 acres, and is considered one of the world’s largest intact freshwater ecosystems. The swamp, designated a National Wildlife Refuge in 1937, is located in Southeast Georgia and visited by 600,000 people annually. The Okefenokee swamp is a unique wetland system made up of peet beds, island prairies, open lakes, creek channels, and cypress forests. It creates an ideal home for wildlife. Wading birds, songbirds, toads, turtles, frogs, and black bears all make their home in Okefenokee, but the most abundant and visible resident are the healthy population of American alligators.

The mining proposals proximity to the Okefenokee Wildlife Refuge, which is one of Georgia’s most precious ecological sites, heightens concerns over the proposed mining.  The mining would impact wetlands on or adjacent to this tract and could permanently impact the hydrology of the entire Okefenokee Swamp. The Okefenokee’s 438,000-acre biodiverse ecosystem is home to the headwaters of two notable rivers, the Suwannee and the St. Marys.

Each year, 600,000 people visit the Okefenokee National Wildlife Refuge, generating roughly $88 million in economic impact in Charlton, Clinch and Ware Counties.
​
Risking the health of the Okefenokee, its ecosystem, and its current economic impact is unthinkable today as it was in the late 1990s. Then, the swift action of concerned citizens, scientists, lawmakers and conservation groups fought off a similar mining threat.

To learn more about this proposal and how you can take action, please visit the Georgia Conservancy website or the 100 Miles website.

Georgia Audubon opposes this proposal and has submitted comments to the U.S. Army Corps of Engineers asking for a public hearing and full environmental impact statement. We have also joined the Okefenokee Protection Alliance with more than 30 other national, state, and local organizations to call for the protection of the Okefenokee. We will continue to monitor this issue as it evolves.
Migratory Bird Treaty Act
One of the nation’s strongest bird conservation laws, the Migratory Bird Treaty Act is under attack. The Act is our nation’s cornerstone bird conservation law. Passed in 1918, it is on the eve of its 100th anniversary, and has seen decades of success conserving birds and bringing numerous species back from the brink of extinction. The law makes it illegal to kill most native bird species without a valid permit.

The U.S. Congress and the Department of the Interior are proposing to severely undermine this important bill. The House Committee on Natural Resources has included an amendment in the Energy Bill, H.R. 4239, and the Department of the Interior has issued a new policy directive that would absolve oil and gas companies from responsibility for bird deaths in oil pits, on power lines, and from other energy-related infrastructure. If passed, this would be a disaster for birds as energy companies would no longer be penalized for unintended bird deaths that result from their activities.

Please take action today and tell Congress and the Administration to fight for migratory birds and oppose changes to the Migratory Bird Treaty Act. You can learn more about this issue and contact your elected representative at https://abcbirds.org/action/petition-mbta.

National Audubon Society and other organizations are encouraging the current Administration to limit offshore drilling to locations where leases are already active. Expanding lease sales to sensitive marine areas off the Arctic, Atlantic and Pacific coasts threatens critical bird habitat as well as the economic viability of hundreds of coastal communities.

Georgia Audubon staff, board members, and volunteers attended a public hearing on this issue on February 28, 2019  to meet with representatives from the Bureau of Ocean Energy Management (BOEM) and express our concerns about the plan. In addition, Atlanta Audubon submitted a letter to the BOEM asking that the Georgia coast be excluded from the drilling proposal due to both the lack of oil resources off our coast and because of the risk posed to birds and other wildlife.  We will continue to monitor this issue as it develops.

To date, more than 360 municipalities and over 2,200 elected local, state and federal officials have formally opposed offshore oil and gas drilling and seismic airgun blasting, including more than 260 along the Atlantic and Gulf Coasts. All the Governors along the East and West coasts - Republicans and Democrats alike - have expressed concerns with and/or opposition to expanded oil and gas exploration, development, and production off their coasts, including the Governors of Washington, Oregon, California, Maine, Massachusetts, Rhode Island, Connecticut, Delaware, Maryland, Virginia, North Carolina, New Hampshire, New York, New Jersey, South Carolina, Georgia, and Florida.

​Georgia Audubon opposes drilling off the Georgia Coast and encourages the Administration to limit drilling to areas where leases are already active.

Parks as Habitat
Georgia Audubon mission is to build places where birds and people thrive. To this end, we support efforts to create and build parks that provide greenspace for people and native plants for birds and other wildlife.

​Camden County Spaceport
Camden County, Ga. has submitted a proposal to build a Spaceport, or rocket launch facility, at an abandoned munitions plant, owned by Union Carbide Corporation, in a rural location four miles west of Cumberland Island National Seashore. The proposal is an economic development tool to bring jobs and industry to the area. The proposed Spaceport would be located east of I-95 and border the Saint Andrews Sound, a dynamic body of water which touches several islands, including Cumberland Island, Little Cumberland Island, Jekyll Island and Raccoon Key, and one which contains the extensive and high-functioning estuary of  the Satilla River. The launch trajectory would take rockets directly over the Cumberland Island National Seashore and Wilderness Area.

Cumberland Island is home to pristine maritime forests, undeveloped beaches, and extensive salt marshes, and supports a rich biodiversity of wildlife and plants. These habitats are crucial to birds because of their natural and pristine state. Cumberland is a hotspot for migratory birds; being Georgia’s southernmost barrier island, it is tremendously important stopover for thousands of birds, like the Blackpoll Warbler, Red Knot, and Peregrine Falcon, where they first make landfall after endless hours of flight or fuel up before their long open water journey back to South America.

Cumberland Island is also an important breeding ground in the spring and summer for many species of birds, including the threatened Least Tern and Wilson’s Plover. During the winter, Cumberland provides exceptional wintering grounds for thousands of shorebirds, wading birds, sparrows, and Bald Eagles.

A draft Environmental Impact Statement (EIS) was released in March 2018.  In June 2018, Georgia Audubon submitted comments to the Federal Aviation Administration (FAA) with the following concerns regarding the proposal:


​Georgia Audubon opposes the Camden County Spaceport and encourages the Federal Aviation Administration to reject this proposal.
Past and Ongoing Conservation Issues 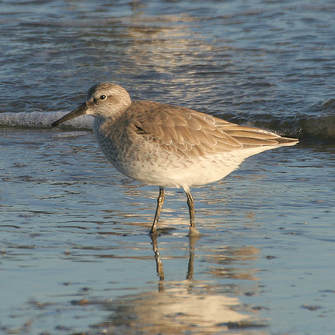 Red Knot by Dan Vickers
Georgia Audubon has spoken out on the following conservation issues:​

While there are many worthy causes that warrant attention, due to limited resources Georgia Audubon has a decision-making rubric we employ to determine conservation issues on which we will speak out. Generally, we will only offer support on issues that will have broad impacts on Georgia birds and their habitats. We do not get involved with local property issues. If you have an issue that you would like to bring to our attention, please email Dottie Head, Director Communications.

If you’re looking for additional support, here are some resources that might be helpful: